Sink or Float?
by 4th Grade 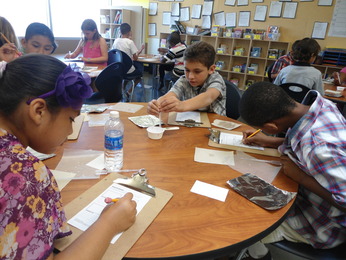 Method
What I did to do this was with wax paper, paper towel, white paper and aluminum foil.We used these materials because we needed to see what happens after we squirt the water into the materials.It's like if we were being like professional scientists all the time.

Observations
What I observed was that in the wax paper the dot that I put in the paper it just stayed in it but thenI started to move the wax paper and so it moved but then it got bigger and bigger. I also saw that the white paper the water was staying but at last the water started to soak in a while.

Questions
I wonder why the water is cold and hot? I wonder why water sometimes is white, green, blue,or white blue and green mixed up together? I also wonder why do we need water so we can survive? I wonder what makes water?

Reflection
What I think I should improve on is not being of topic and writing more details in the paper because the people who were at my table were distracting me off and I think I needed to write more details because then people can know how I did this and how I used these materials.

Our class also did a project with some 9 cards that said the names of different liquids (Water, rubbing alcohol, corn syrup, vegetable oil, whole milk, lamp oil, dish soap, honey, maple syrup.) We all got partners and we had to try to order them from least dense to most dense. We first made guesses. After that we learned the real order. It was (least dense) lamp oil, rubbing alcohol, vegetable, water, dish soap, whole milk, maple syrup, honey (most dense.)

If you sink you displace your volume.
When an object sinks in water, it displaces its own volume.  This means that the water level rises to match the amount of space the object is taking up in the water.

If you float you displace your mass.
When an object floats, it doesn't push as much water out of the way as if it would sink.  It displaces an amount of water that is equal to its own mass.

By DeAndre and Izabelle

Buoyancy helps things float. For example, if you put a boat in the water it will float because of displacement and the water is displacing it with the boat’s weight. Also it helps things float because of volume. Volume is what is inside something, like empty space inside an object. I like buoyancy because it is very interesting and how it works. Buoyancy is interesting because it is cool how a really big boat can float and how something really small like a penny can sink. It sinks because it is small but not all things that are small will float. It also sinks because it is medal, but it is not because of that, medal also floats. It is because there isn’t enough room to hold that much air inside the penny and that is why pennies are a bit heavy and not so light.

This is a picture of a penny sinking in the water. This picture also shows the mass of the penny, the gravity that is getting pushed down, and the buoyancy that is pushing up.

Buoyancy Discoveries and Questions
by Cameron

Questions
My questions are why does everything float in different liquids? Why do you have to make the volume smaller to make a brick? 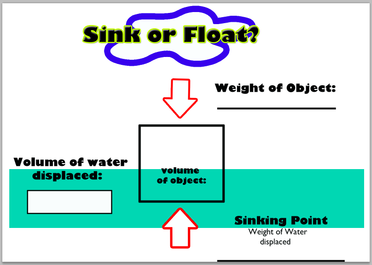 by Lucia
How is it, that boats float? I know, boats float using many different tools like a keel, they use density, volume and  weight. If you you want your boat to float you should find out how many weight it's going to carry. The weight matters because if it is too heavy it will probably sink. You also need to know how much water your boat displaces once you figure that out you need to weigh the water it displaced. The weight of the water it displaced is the boats sinking point. If the object the boat is going to carry heavier than the water it displaced than the boat is going to sink. Buoyancy means the buoyant force pushing on an object. Studying volume and mass helped understand why boats float because I learned that if a boat is sitting on water and it's trying to displace the water below it but the water is heavier than the boat's volume that is what is keeping the boat from sinking.  Read more at Lucia's Blog.